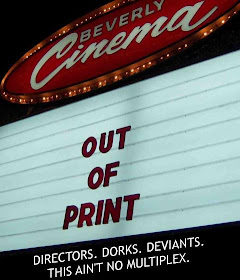 When I started going back to the New Beverly Cinema regularly in 2007, one of the first people I noticed there visit after visit was Julia Marchese. I didn’t know this then but she’d only been working there for about a year, yet she was clearly someone who served as a sort of galvanizing rod for the excitement and sense of adventurousness that was really beginning to coalesce around the cinema at just around the time the New Bev’s original owner, Sherman Torgan, passed away. One of the reasons she drew people to her like moths to a projector lamp, of course, was that she was (and is) cute as a button—when I first noticed her I’m sure I wasn’t the only male (or female) film geek who loved her look. (She favored the emblem of geek goddesses—plastic framed glasses—at the time.) But she also clearly loved being at the eye of the hurricane, gathering the creative people who would become hosts of the events and Q&As that would become one of the New Bev’s signatures in the revival cinema community, all the while showing her own gumption and creativity in helping to make the events happen. (This kind of confidence and enthusiasm can be, for appreciative film nerds, even more attractive than plastic framed glasses.) And after five years in which I’ve come to feel as though I’m a part of that New Beverly community—and it really is a community—it’s become increasingly clear about Julia’s place of importance at the heart of what goes on there. For many of us she is the first person we see when we come to the theater, either when we purchase our tickets or buy our popcorn. She is the bright and shining face of the New Beverly Cinema. (She's also become a good friend to my family and me.) 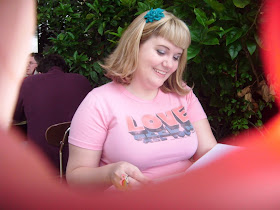 Beyond that, Julia really has stepped up to become a representative of what the theater itself means to the film community at large—that is, the effort to keep revival cinema and the ability to project 35mm prints alive and well in the face of the digital cinema revolution. Her work began earlier this year with a widely circulated petition (upwards of 10,000 signatures) designed to raise the consciousness of filmgoers and studios as to the perils of supplanting the distribution of 35mm prints with a digital-only option. Features in many publications, including a high-profile story in the April 12 L.A. Weekly , have outlined the dilemma and acknowledged, among the efforts of many others, Julia’s resolve and passion in helping to preserve the 35mm tradition.

And now Julia is trying to take the next step by making a film herself. Last month she initiated a Kickstarter campaign to raise funds for the making of a documentary in which she hopes to chronicle the storied history of the New Beverly Cinema, a place that is clearly as important to her as blood and oxygen, and also inevitably to fold into the narrative the struggle facing revival cinemas like the New Beverly, but also other single-screen revival, first and second-run cinemas worldwide, as the prospect of expensive digital conversion looms like a scythe over their tightly budgeted bottom lines. The movie will be called Out of Print, and in telling the story of the New Beverly Julia hopes to interview not only some of the famous filmmakers and actors who have become frequent guests and patrons, but also some of the less instantly-famous regulars, and she also plans to chronicle the stories of other cinemas facing similar situations around the globe. (As part of that process, she’s even been invited to program a week of films at a revival cinema in London later this year.)

The catch (and there always seems to be a catch, doesn’t there?) is that Julia is relying on Kickstarter to gather the funds for her project, and she’s not quite there yet. She has projected a budget of $75,000 so that she can hire a professional crew, pay them a reasonable wage, and also fund the film’s physical production and promotion. But Kickstarter’s deadline is May 24 (that’s this coming Thursday, for those of you without calendars), and if she doesn’t reach that $75,000 goal in time the funding that has already been pledged will go away and she’ll be back to square one. So far she’s pulled in over $32,000 from generous film fans who have pledged as little as $1 and as much as $5,000, and that’s an incredible result, especially in a battered and bruised economy. But the truth is, even in the best of times the community of hard-core film lovers tends to be populated by folks who don’t have a lot of money to spare, so the fact that Julia has gathered as much as she has in such a relative short amount to time really speaks to the love people have of the New Beverly and, frankly, toward Julia herself. (Her sincere enthusiasm is so infectious, she even managed to squeak a three-figure donation out of Yours Truly, and I ain’t exactly Scrooge McDuck.) 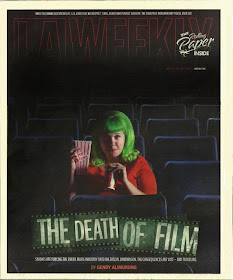 Plainly speaking, the prospects for Julia’s film become more and more tenuous with each tick of the clock moving toward that Thursday deadline. It would be nice to think that someone in the film community, wherever they might be, could and would swoop in at the last minute and fill in the financial gap that remains looming between Julia and the fulfillment of this cinematic dream. But that kind of thing usually only happens in the movies. The reality is, while acknowledging the fantastic generosity of those people who have already donated, Julia still needs about $43,000 if Out of Print is to ever get made. There is no more time for glad-handing and the subtle approach. It is my sincere hope that you will join me and hundreds of others who have already made our pledges and offer your support for Julia’s project, one that is intended to honor the history of the New Beverly Cinema and move toward a confident stride into its future. $43,000 is a lot of money to drum up in less than a week, it’s true. But the future of theaters everywhere that are unwilling or cannot afford to make the switch to digital projection are facing even dicier chances than that, and by creating a cinematic document of the history of the New Beverly Cinema, one of the last surviving calendar-based revival house in the world, Julia hopes to honor not only the theater but the movies themselves and the hope that they would continue to thrive and reach people via the 100-plus-year-old format in which they have always thrilled us. Have three or four fewer lattes, go out to eat one or two times less this month, and voila—you might just find yourself with a few extra dollars which you can pledge toward all the pleasure the movies, and the New Beverly Cinema in particular, have provided you over the years. Please consider using that spare change to support Julia Marchese in her march toward production of her first feature, Out of Print, whose title will hopefully prove not to be prophetic after all.

(Visit the Out of Print Facebook page for updates and further important information.)