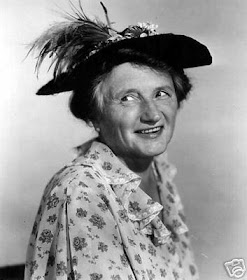 It's a day for flowers and chocolate-dipped strawberries and long-distance phone calls, for sure. And this Mother's Day, while I'm away from home, these tokens may or may not mean more than they usually do-- I wish I could deliver them, and the attendant hugs and kisses, to all the moms in my immediate family in person. But I can't, so I figured I'd just ruminate for a moment publicly about the mothers I love most, in real life and in the imaginary world of the movies. Ma Kettle, as embodied by Marjorie Main, remains the movie mom I love most who not only tickles my funny bone but also grabs me (firmly, but also gently) and takes me back to the world of growing up around my mom's mom. Grandma Dee was a woman with a pioneering spirit who, with my grandpa, built her own house on a plot of land west of Lakeview, Oregon and developed a small farm around it that she lived on and eventually refused to leave, even for groceries, until the day she died. Every time I see Ma Kettle I think of her, and for that I'm forever grateful. I have no pictures of my Grandma Dee to call up right now-- Dee was the name her grandchildren and friends called her, but her birth certificate read "Darlene"-- but if you look to the sidebar on the right and down just a bit you'll see a picture of me in the arms of my other beloved Grandma, whose name was Rina. (I wrote about her briefly here in 2009.)

The other three mothers that I most favor in the movies aren't exactly exemplars of the shiniest, most upstanding qualities of motherhood, but they are indelible and powerful portraits nonetheless. Kate Bush's song "Mother Stands for Comfort" appeared on her Hounds of Love album in 1985-- that chilling portrait of motherly love taken to a logical, frightening extreme projects forward with eerie prescience the character conjured by Hye-ja Kim in Joon Ho-bong's devastating Mother (2009):

Because Mother stands for comfort
Mother, hide the murderer 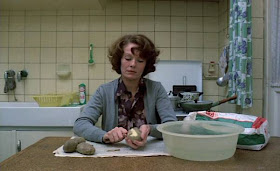 Of course, Delphine Seyrig's beautifully modulated performance as Jeanne Dielman in Chantal Akerman's thrilling Jeanne Dielman, 23 Quai du Commerce, 1080 Bruxelles presents a somewhat different point of view on the joys (or lack thereof) involved in maintaining the illusion of familial ties. This is a major high-wire act that looks like anything but, a chilling glimpse into the head of one mother whose life has become a shell of routines that only faintly resemble the familiar surroundings of home and hearth and gestures of motherly comfort. 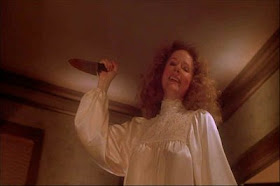 And then there is my go-to movie mother when I need a high of unmatched, blackly comic proportions-- Piper Laurie as Margaret White, who embodies the the death-grip of motherly concern and the horrors of repression and religious oppression all in one deceptively inviting, coldly judgmental bosom. (Her daughter Carrie's breasts may have been dirty pillows in her eyes, but I always imagined that Margaret regarded her own bosoms as somewhat more seductive and alluring than that, deep down in that place where she tried to shove all those kinds of thoughts so maybe even God wouldn't find out.) I often think of Laurie's Margaret and when I do I'm not thinking of a woman I would want for anyone's own mother. Instead, this brilliant performance embodies for me qualities which certainly make her, for me, the greatest of all devastated and delusional movie moms-- so powerful is Margaret's professed love, refracted as it is through the blood-stained glass of her own religious obsessions and forever corrupted at the point of being turned loose on a daughter who most needs the kind of comfort her mother is incapable of providing.

Those are the movie moms of the imagination. Thankfully, the mothers in my own real world have been somewhat less dramatic, something more than oppressive or willfully manipulative or robotically distracted. My moms, all three of 'em-- they are all so much better at being that person we all look to for guidance and strength and love than they would ever admit. All three are there whenever we kids need them and (luckily for we kids) even when we don't. 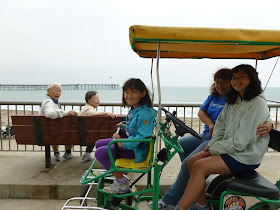 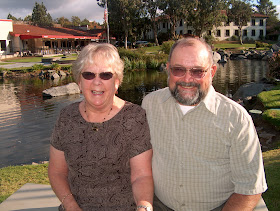 To Baa-Baa (our name for Patty's mom, a beautiful, diminuitive, utterly generous lady), Neoma (my own mother, whose indulgence and support made my life growing up as a teen in a cowtown among kids whose interests were largely far different from my own as happy as it could have possibly been), and of course, my dear wife Patty, who never thought she had it in her to be a mother and who has turned out to be one of the best, a jewel in the eyes of our daughters-- and, of course, mine-- I give all my love and tribute today. Happy Mother's Day to my three beautiful Moms.